As a general contractor we love reading stories like this knowing that we did everything possible to help ensure the success of our clients' endeavors. We are celebrating with you as you celebrate one year in your new building, Hendersonville Community Co-Op!

The co-op jumped. The marketing study had shown that co-op shoppers were primarily from the central part of the county. To move far from its old location, on South Grove Street, was too risky.

“We also looked at the traffic flow here on Spartanburg Highway and we saw there was enough traffic to make it a desirable location,” said Gretchin Cummins, the community outreach coordinator. By then, the co-op’s planners had already decided that renovating an old building would not be as environmentally sound as building a new energy-efficient facility. Although the building does not have LEED designation for green qualities, Cooper Construction worked with the co-op to make it as efficient as possible.

The new 8,000-square-foot store opened in February 2015 and had an official opening in April. It plans a one-year birthday celebration on Earth Day, which is Friday.
Despite a market with those 17 competitors, the co-op continues to grow its customer base, touting locally grown and produced food, fresh produce, organic options and a larger wellness aisle. Sales are up by 47 percent in 2015 over 2014. The store has 47 fulltime equivalent employees, up from 33 in January 2015. What might have seemed like a roll of the dice two years ago looks now like a safe bet.

“Upon opening we discovered that our parking lot was always full,” Cummins said. “We needed to park the staff elsewhere. It was really a good problem to have. We did notice that it was immediately a really busy place and we had a positive reaction, especially in the deli.”

“What we all kind of notice is that the deli is kind of a gateway drug for co-op shoppers,” she added. “Then often times the rest of the store sort of slowly unfolds to them.”
The new co-op offered an expanded menu of ready-to-eat sandwiches and wraps, soup, salad and hot food. It added inside and outside dining, and welcomes a diverse crowd ranging from construction crews to white-collar executives, young moms pushing strollers to elderly couples sampling the cheese specials.

“We added a cheese case with specialty items and added our meat department that is fresh and grown as sustainably as possible,” Cummins said. The co-op added a larger bulk food section, maintained its grocery and dairy aisles and added a cash register. One thing co-op shoppers notice is they seldom have to wait in line.

“We just wanted to join the modern age of efficiency while also offering the unique co-op experience that people have already enjoyed,” Cummins said.

Written by Bill Moss, Published in the Hendersonville Lightning on April 22nd, 2016. 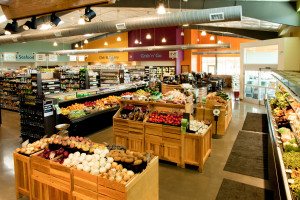 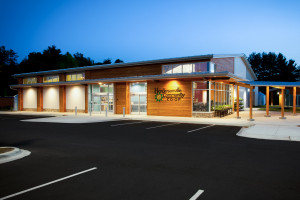 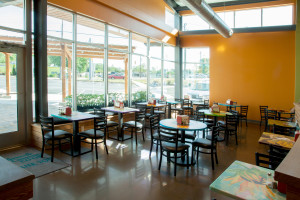